The website www.rpgstash.com has been around since 2004 but our story does not start there.

A long time ago in a student dorm in Sweden, a Diablo 2 addict discovered that in-game items could be sold for real money. The year was 2000 and most of the orders were managed via MSN and paid in cash.

By the end of the year, it was time to move on from the dark of the student dorm to the brightlit eBay.com. Loads of items were sold via a few accounts that quickly reached power seller status and by the mid of 2001 it was time for our first website godlyitems.com. It was a simple html website that focused solely on Diablo 2 and the US market. Although simple, it was one of the very first Diablo 2 websites and a true online pioneer that quickly grew hugely popular. The main commodity was sojs until the expansion Lord of Destruction brought a larger variety of items into the game. 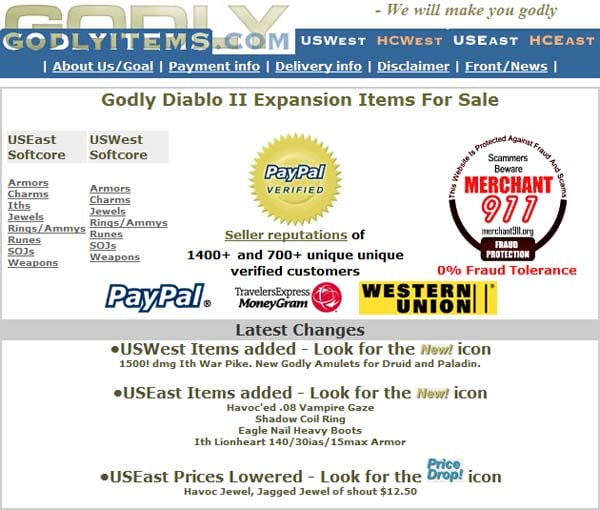 At the time, most of the trades were announced in the trade chat channels in-game and like with all repetitive things in life it’s easy to get sloppy. It was more rule than exception to stay in a publicly announced trade game and mule items after the trade was completed. When late guests arrived and found the encampment ground littered with Stones of Jordan, they never hesitated to help cleaning up and they never left without saying thanks. There was much one-sided joy in those brief moments that always ended with sojs cascading from the pockets of the gentleman thief. For no inventory space can accomodate the greed of a player in need. And when speaking of sojs and need, this little gem comes to mind:

In 2004, we decided to expand to more games and for this purpose we created rpgstash.com. A more modern PHP based site.

The first step was to expand Diablo 2 to Europe realm. After that we made our move to Guild Wars and World of Warcraft. Two games that, unlike Diablo 2, had player bound items and therefore were more or less restricted to currency transactions. Not our cup of tea so we kept on looking. Our next pick in early 2006 was Runescape, and this turned out to be a good marriage. A game with a completely player driven free trade economy without division into servers, heaps of items and a neverending demand for gold. As our Runescape shop grew, we brushed up the website as well giving it a fresh new look.

I still remember the early Runescape deliveries made by logging into customers’ accounts, transporting them to Lumbridge and then trading with a character of our own. I knew nothing of the game at the time and much hilarity ensued. Wolves snapping at my heels as I crossed mountains to enter free play zone. Slain by a random world event – in the form of pirates – in Lumbridge and losing my first batch of gold in the process. Another cherished memory is when I got lost in Draynor mansion with wights breathing down my neck and millons of gold weighing me down. Those were the days. Good thing that we now have live chat facilitating our trades, and that we can pride ourselves in our game knowledge.

MU Online was the next pick and although very similar to Diablo 2, it has never had the player numbers required for a significant game economy to evolve. Then we tried MapleStory – a game with a client clearly designed to keep players out of the game – and although a promising enterprise, game client aside, we never really hit it off. Simply too hard to aquire items on all those servers and just selling mesos is not really something we fancy. We want to offer all there is to players, not just currency.

Then we gave EVE Online a go, and this has so far been the most promising venture since Runescape with free player driven economy and a great community. At moment the majority of our EVE Online services are only accessible on an external website but all that goodness will be made available on RPGStash.com in time.

Over the years, we have tried many other different titles such as Dofus, Everquest 2, FFXI, and Age of Conan, but they just don’t seem to flow with our business philosophy. We have always focused on quality, service and specialisation, and not all MMOs flow along with that. There will never be a lack of new games at RPGStash but we will only stick to the ones that allow us to perform those ground breaking quality services that you can’t find elsewhere.

The bottom line is that we don’t want RPGStash to be a run of the mill MMO gold site. It has never been such a site and it will never become one.

RPGStash is special and unique, and to help us stay that way we need more than just our own principles. We need your feedback. Please tell us what games and services you want us to feature. We have a brand new website and we are looking to fill it with content. 10 years from now, we want to write a new retrospective starting from 2013 and spanning over greater memories of cooler services and even better games. This may be a retrospective, but rest assured that we do not dwell on the past. We live in the present and now you know where we are coming from. Let’s make the future happen.