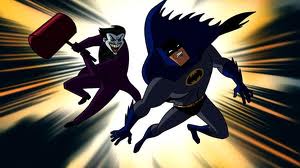 A world overrun by heroes leaves little room for villains. In modern entertainment ranging from movies to games, the villain is always a suggestive figure whose evildoing lies in the past and/or awaits in the future. In the here and now the villain has a plan, a past, or an evil look to him but does little to no evil. Before anything of significance happens, the hero always intercepts the villain, preferably in the villain’s own house, and administers justice in accordance with his own superior moral code.

This begs the question: is the villain really a villain? He is assumed evil while the hero is assumed good, but if he does no evil, then what makes him a villain? In the real world planning a crime is not a crime. The person must perform an action outlined in the plan before it becomes a crime. In the real world evidence is also required before someone can be convicted. Something that is illegal, on the other hand, is taking the law in your own hands and dispensing justice as you see fit. This means that by real world standards, the hero of our movies and games is actually a villain and the villain is actually a victim. The villain is not always innocent of course but in no way is his evil convincingly conveyed or the justice well served. It is tasteless.

In Lord of the Rings the poor orcs get slaughtered in their thousands just for walking in the woods or daring to step unto the plains of Rohan. Since when did existing become a crime? In World of Warcraft the local animals get slaughtered in their millions for XP while “monsters” are raided in their own homes and completely wiped out for loot and XP. What did they ever do to you or anyone else? The player is not only a mass-murderer, he is also a robber and a thief.

And the problem is not just the mono-directional violence. It’s the ridiculous scale of things. The hero lifts his hand and the villains die in their hundreds. The hero farts and the villains die in their thousands. The hero opens his mouth and the world turns silent. Whatever happened to getting your ass kicked over and over again by a laughing asshole that pisses you off so bad your head turns purple? Whatever happened to finding friends and love only to get them ripped away from you by your enemies? Imagine beating the crap out of that laughing asshole or getting revenge on those that took away all that you held dear. Only to realize that they also have friends and families. That would be self served justice with consequence.

It’s fortunate that movies and games are not real. They are fantasies for us to revel in. The problem is that a fantasy with no laws or rules except the impeccable right of the protagonist is utterly boring, uninspiring, and underwhelming. Sure, it’s fun to kick ass but without a plausible context it quickly gets old. Entertainment should stir up emotions. It should make you angry, happy, and sad. It should make you laugh and cry. It should overwhelm. A mass murdering self-righteous hero without past or future does not deliver.

The hero is the villain, and we are all so bored that we have forgotten what it means to be entertained.